The following is a post written over two years ago, it was written prior to the striker’s disastrous fractured skull injury. Prior to this November 21st 2021 injury, it appeared the Mexican striker was destined for bigger things. It serves to show how fast things change within the football landscape for these players. 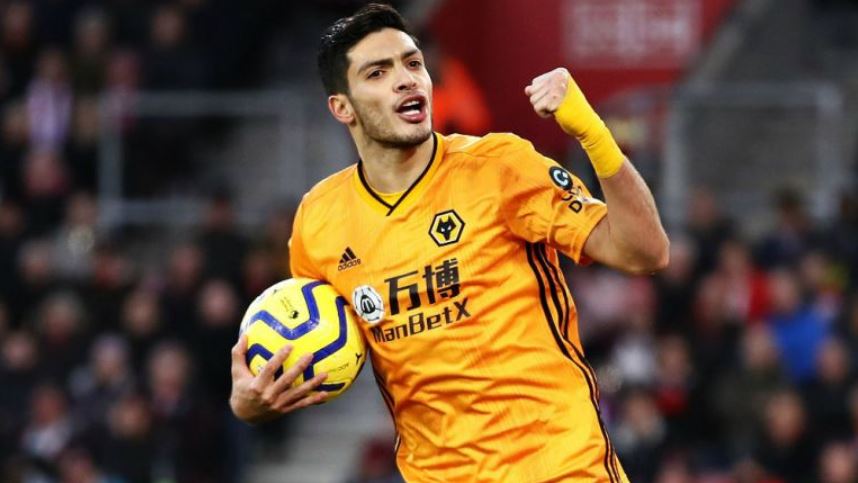 Will Raúl Jiménez remain with the Wolves this upcoming season? Image courtesy of Curiosidades y Mas.

Raul Jiménez has greatly impressed English pundits this season. His stellar campaign of 17 goals in 36 starts has raised interest from the most decorated clubs across Europe. As such, his future with Wolverhampton is not guaranteed. What club would be the best fit for the Mexican international?

Jiménez is no stranger to intimidating atmospheres or demands of excellency. He played youth football with Liga MX juggernaut Club América & debuted with the first team in 2011. In three years he made 96 appearances, scored 36 goals & helped win the 2013 Clausura tournament. Along the way, he represented Mexico as they claimed gold at both the 2012 London Olympics & Toulon Tournament.

Later, he would move onto Atlético Madrid in 2014 for €11 million. Unfortunately, he played very little in a forgettable season in the Spanish capital. To avoid stagnation, he made a move to his third capital club, S.L Benfica of the Primeira Liga.

Having joined one of the traditional “Big Three of Portuguese football”, supporter expectations were always high. Even though Jiménez featured 80 times for Benfica the majority of these appearances were off the bench. Nevertheless, the Mexican forward revelled in the “Super Sub” role and netted 18 goals for the Eagles. Together they won the Primeira Liga in 2016 & 2017 along with two domestic cup titles.

In August 2018, Wolverhampton Wanderers secured Jiménez on loan from Benfica. It was Wolves first season back at the top division of English Football in six years. Since then head coach Nuno Santos has maximized Jiménez ‘ability to the cusp of qualifying for European football. Their loss to Chelsea means Wolves finish the season in 7th & without European football next season.

However, Wolverhampton are still in contention for Champions League football next season if they overcome Olympiacos August 6th & continue on to win the Europa League tournament. If Santos can guide Wolves to Champions League football next season it will help convince his star striker to stay. If they do not qualify for UCL, the clubs participating with a larger wage budget will surely lure Jiménez away. 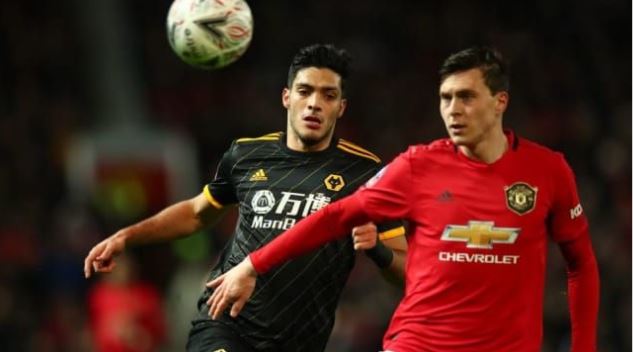 The leading rumor is that Manchester United are hoping to sign the Mexican striker. United supporters fondly remember their last Mexican striker, Javier ‘El Chicharito’ Hernández, for being a constant goal threat in the penalty box. Like his compatriot, Jiménez is a goalscorer but also contributes to the offense with critical passing & physicality. With seven assists Jiménez is a striker with the vision to create a more dangerous offense.

Manchester United are in the thick of pursuing Jiménez. Their manager Ole Gunnar Solskjær is a United legend & was a goal machine for the club. He has already improved the end product of United’s current forwards. Solskjær would relish the opportunity to coach a skilled striker in his prime.

At the moment, Anthony Martial is United’s starting lone striker in a 4-2-3-1 set up. This move has paid dividends as the Frenchman is having his best professional season scoring 17 goals & assisting six. Would signing Jiménez move Martial back to the left wing role? Is he the secondary striker needed with the schedule congestion of EPL, UCL, & domestic cup football? Or is Solskjær adapt to coaching a two central striker system?

Solskjær will be motivated for reinforcements without a central striker backup to Martial once Odian Ighalo’s loan spell expires. A dismal display of two shots on target from within the penalty box against West Ham demonstrates United need a boost. After their 3-1 FA Cup semi-final defeat versus Chelsea, Solskjær was slammed for rotating his starters & changing formation. Others lamented the squad’s lack of quality depth was out of Solskjær’s control.

Considering Jiménez is the undisputed stiker at Wolves, would he sign for a club possibly offering less playtime? United certainly have the money to secure his signature.

Another suitor for Jiménez is Italian giant Juventus. I Bianconeri have officially won nine Serie A titles in a row. On the other hand, their Champions League fortunes have fallen excruciatingly close, silver medalist in 2015 & 2017.  Currently, they face a 1-0 deficit in their Round of 16 fixture against Lyon. Manager Maurizio Sarri will need his superstar forwards Cristiano Ronaldo & Paulo Dybala to not go scoreless in the return match.

Although he is the oldest outfield player on the roster, Ronaldo has destroyed Serie A defenses scoring 30 goals in 31 appearances. This accounts for 41% of Juve’s total goals for the season, a tremendous burden for a 35 year old.  Jiménez ‘goal contribution including assists for Wolves was 45%. Together they can share the scoring responsibility & overwhelm defenses to win the Champions League together alongside the league.

At Napoli in 2015, Sarri guided Higuaín to his most productive season. Currently, his performances no longer justify his reported yearly wage of €7.5 million per season. Juve will be desperate to replace Higuaín after not scoring more than 10 goals in three years. Sarri has had to switch between 4-4-2 & 4-3-3 depending on Higuaín’s inclusion into the starting lineup.  Jiménez’s success as the central forward will allow Sarri to confidently play his favored 4-3-3. Flanked by Ronaldo & Dybala, there is no doubt Jiménez will win titles with Juventus. 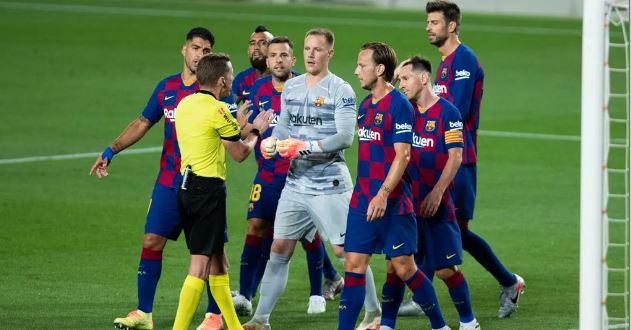 Will Jiménez turn the fortunes of the Catalan club? Image courtesy of Twitter.

In May during an interview with ESPN Mexico Jiménez stated, “If you tell me that tomorrow an offer from Real Madrid or Barcelona comes, it is obvious that you do not let such an opportunity go”. After losing the Spanish league title to Real Madrid, Barcelona will be  more motivated to make an offer for the Mexcian striker.

During the January transfer market, injuries to Luis Suarez & Ousmane Dembele forced Barcelona into purchasing Martin Braithwaite. The Danish striker initially impressed scoring in the season restart against Mallorca. Yet, after only four starts, the latest a 2-1 loss against Osasuna, reports from Mundo Deportivo postulate he will be moving on after only five months.

Barcelona’s defense gave up 15 more goals than Real Madrid, ultimately costing them the title. Yet, they led the league in 86 goals scored for the highest goal differential in the league. Lionel Messi & Luis Suarez accounted for 46% of those goals scoring 25 & 16 goals respectively. Both are 33 years of age, how long can they continue this fine form?

Conversely, Frenchmen Antoine Griezmann’s impact has been overshadowed by his attacking partners. After the league restart he scored only one goal, a total of 9 for the season. Still, Jiménez & Griezmann playing style & vision are complimentary. Griezmann trails only Messi this season in total key passes. Jiménez would take those opportunities for himself but can return the favor to his teammates.

The two were teammates at Atlético Madrid & are both 29 years of age. This tandem could be the ones to ease the transition of a Barcelona squad without Lionel Messi or Luis Suarez. However, Barcelona are said to be leading the race to sign Inter Milan striker Lautaro Martinez. Bringing in another Argentine to support Messi could be the clubs last resort to appease their legend before he retires.

Where will Jiménez play next season? Image courtesy of The Sun.

In this case, Jiménez will have plenty to consider before deciding on his sporting future. Most importantly, he welcomed a baby girl into the world this week. Assuring his family’s financial future is more important than ever & with his stellar season he deserves his biggest contract yet.

All the aforementioned clubs certainly have the financial balance to pay him his worth. However, his current contract runs until June 2023 which team is most willing to match Wolverhampton’s valuation? Due to their exclusion of European football next season Wolves have less negotiation leverage. Therefore, they cannot reject offers & drive up the price without risking losing Jiménez for significantly less in the future.

Also, which club will be the best fit for Jiménez? Which will give him the opportunity for more silverware? At 29 years of age Jiménez needs to be a consistent starter to make the most of his physical prime but to also remain on the Mexican national team roster.

Thus, Juventus is likely the best destination for Jiménez. Undoubtedly, his contribution to Juve would lead to a 10th Serie A title in a row. If he does land in Turin the club will financially benefit from large crowds of Mexican fans following the striker. Familiarity with a three forward system & goal scoring experience in the Champions League at Benfica, Jiménez seems primed for success.

As well, his inclusion supports the elder Ronaldo while also removing pressure on Dybala’s continued growth to stardom. With Higuaín likely leaving the squad this summer, Jiménez will have a starting role to claim & maintain. Jiménez & Juventus have the potential to win endless titles & be Champions League winners.